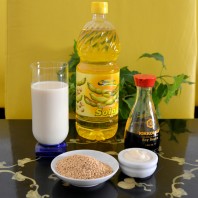 Soya, something more about it.

Shoyu sauce: liquid obtained by the fermentation of soy beans, wheat, water and salt. It has a strong flavor and slightly salty, also used to flavor salads and vegetables or dishes (making sure to add it at last minute of cooking).
Tamari: liquid sauce, more intense flavor, darker than the shoyu, obtained by the fermentation of soy beans, water and sea salt. It’s used in cold months, when energy increases is needed. Dosing sparingly, cause its higher concentration.
Miso: creamy sauce obtained by fermentation of soy, grains and salt. Rich in vitamins, proteins, minerals and enzymes, which shapeing digestive system. It should be added to the dishes melting with a few water or vegetable broth, just before serving.
Temphe: dough, obtained by few hours water maceration of soybeans, then boiled and mixed with a portion of temphe from  previous preparation, just like us make home-made yogurt,  so we use jar of yogurt from last preparation. Most famous in Indonesia, Malaysia and the Philippines.

Soy milk: only recently arrived in Europe; is a highly digestible food, obtained by boiling and squeezing the yellow soybeans, similar to cow’s milk but devoid of saturated fat and cholesterol. Rich in vitamins, protein, minerals, carbohydrates, soy milk suitably treated, is used as alternative food for adults and children who have intolerance to other types of milk.
Tofu: also called bean cheese, (from Japanese to-fu that means meat without bones), for thousands of years was the most consumed food in the East, au natural, smoked, fried, seasoned with condiments, dried, fresh or as cream, sauce or hamburger. To achieve its drying, tofu must undergo seting, freezing outdoors, natural drying, and alternation of freezing and thawing ….!
Yuba: kind of film, obtained by heating the soy milk in a flat pan, thus forming this thin and dense layer, like a film, which picked and dried. It’s very rarely to see the yuba.
Moyashi: you get green or yellow soybean varieties; it’s one of the most consumed vegetables in oriental countries. Even in the West, through  the spread of Chinese cuisine, we have learned to appreciate the bean sprouts, that can be eaten after boiling. The procedure to obtain the sprouts is different for different varieties;

Register for this site!